The Impact of Overbuilding on People and the Planet

Tina Fawcett reviews this book which challenges the continued growth of new building stock, instead calling for stewardship, adaptation, reuse and equitable sharing of our existing buildings.

The title of this book ‘The impact of overbuilding on people and the planet’ under-sells the breadth and ambition of its content. Overbuilding is defined as the growth of building assets exceeding demand – examples of this phenomenon include empty speculative commercial offices in Australian cities and under-populated residential buildings in Chinese ‘ghost cities’. However, the author’s interests go beyond unused buildings in particular places, at particular times. His fundamental concerns are about ‘inequitable over-consumption' - the human and environmental costs of luxury apartments. The author sets out his ambition thus: ‘this treatise puts forward a theory for a circular, sufficient and equitable built environment. It takes a “big picture” view and brings to the fore the frequently overlooked concept and principles of total asset management’ (xxi). He is also concerned about the loss of traditional architecture, particularly where this is cleared to make new buildings for the elite.

In the preface, the author shares a brief personal history and highlights his concerns about spurious environmental claims made by new commercial building developments, with reference to examples he knows well in Australia and China – and notes his delight in discovering writings on the circular economy and sufficiency, ideas which mirror his own thinking. He links the values of personal frugality, related to his post-war upbringing, to the elegance Mies van der Rohe’s ‘less is more’ approach to architecture. These values and ideas, and explorations and combinations of them, run through the book, which claims that we need to focus on all the resources needed to create and maintain buildings, not just operational energy use.

This comprehensively referenced book draws on a wide range of literature from classic works in environmentalism, architecture and systems thinking to less expected areas of knowledge, such as Buddhist economics and Japanese philosophies of the good life. There is a recognition throughout of the history of ideas in architecture and building and how these have developed. The author acknowledges the strong influence of other thinkers and practitioners, and refers frequently to the work of Walter Stahel, the originator of the circular economy concept. He also builds on themes from his own earlier work, as a single author (Ness, 2008) and with Ke Xing and other colleagues (e.g. Ness and Xing, 2017). Examples of good and bad practice are sourced from many countries, including China, Cambodia and UAE, as well as the author’s home country of Australia.  Most examples are from the commercial property market, but housing and public sector buildings are also mentioned. At the end of each chapter there are short, reflective summaries, which are a helpful resource.

Throughout the book provocative sub-headings feature, including: ‘resource considerations lost in the carbon haze’, ‘big and green don’t sit well together’, and ‘are green buildings somewhat brown?’. A key argument is that too much attention is paid to operational energy use, and its consequent carbon emissions, compared with material use and the embodied energy within buildings. The author claims the importance of reducing profligate private and public consumption of resources as part of the response to climate change has been overlooked. The green credentials of some large new developments are also challenged in some detail. He endorses the sentiment that ‘the greenest building is one which doesn’t need to be built’ and criticises ‘Australia’s obsession with construction of new facilities’ with reference to examples from Adelaide and Sydney. In addition to tackling big themes and contested topics, a number of practical suggestions are proposed: improving the performance of the existing stock; removing barriers to re-use of buildings; using smart systems to facilitate advances in material management through the development of ‘buildings as material banks’.

In Chapter 4 a number of influential concepts in building and architecture are introduced, including ‘long life, loose fit, low energy’, life cycle thinking, open and adaptable building, resource efficiency and moving from products to services. The author reflects that in the late 1990s there was serious concern about the depletion of the world’s resources, but fears that this thinking has been superseded by the ‘green low carbon movement’ which, by focusing on operational carbon emissions, misses the bigger environmental picture. It has nothing to say about the social impacts of re-development. The danger is that it encourages a belief that the only changes needed are increased energy efficiency and renewable energy. Although there is value in a focus on carbon reduction, this represents just part of the journey towards sustainability and is insufficient to achieve the strong transformation required.

The author develops his theory in Chapter 7 to address inequitable overbuilding in the developed world. It comprises  a set of values, principles and a framework for practical application to building-related decision-making at various scales and combines recent findings from the literature and practice. The key elements of the theory include fundamental ethical values, including sufficiency and sharing, and explicit goals related to the SDGs, as well as philosophies of building stock management, including a ‘total asset management’ approach and a focus on services. It acknowledges the needs of developing countries, as well as questioning the ‘wants’ of the richer world. This aligns with existing debates around sufficiency, what it means, to whom, and how to operationalise this idea.  Definitions of sufficiency are not explored in detail in the book, but the idea of ‘enough’ is clearly an important personal and professional value, in evidence from the preface onwards. As the author notes, bigger changes to our economic systems, policies and financial instruments would be needed to operationalise his theory. Transformational ideas are briefly explored in the following chapter, ranging in scale from ideas to reform the whole economic system to better metrics for resource productivity.

In the penultimate chapter the author applies the principles / theory he has developed to a thought experiment about the 2020 Tokyo Olympics (in the future at the time he was writing) – titled ‘towards a circular, sufficient Olympian ideal’. This chapter shows that sustainability promises at previous Olympics, particularly about the legacy and future uses of the buildings, have often not been met. Nevertheless, he suggests ways that Tokyo and other future Olympics could do better by embracing a circular and sufficient approach. This would include reduced service demand, considering asset options for supporting service needs (including the no-build option), making optimum use of existing facilities and infrastructure, plus extracting more value from assets and components by their reuse and provision as a service.

The book closes with a manifesto and pathway to improvement and transformative change. The author hopes this will be a starting point for inclusive debates, critiques, further adjustments and hopefully acceptance of the modified version by governments, communities and building professionals.

Particularly for readers relatively new to this field, one of the real strengths of the book is the richness of sources referenced, and its explanation of the history of ideas and how they are linked. The disadvantage of such a wide-ranging book is that the key arguments sometimes get lost in the detail. Inevitably, not every relevant topic is covered. For example, the role of land use planning seems largely overlooked. The author suggests that strategic ‘build, refurbish or no-build' discussions are needed at the inception phase of a project – but there is strong role here for local planners too.

The book was written prior to the Covid-19 pandemic, and the change in working practices for office-based workers that has entailed. Current debates about the future of office-based work and rethinking the need for office space chime very well with key themes in this book. The author might be pleased to see that the importance of refurbishment as an option for commercial buildings is being increasingly recognised in the UK (Partridge, 2022) and that interest in circular economy approaches to the built environment is on the rise (LETI, 2022).

LETI (2022). Circular Economy for the built environment: a summary. https://www.leti.london/circulareconomy1pager 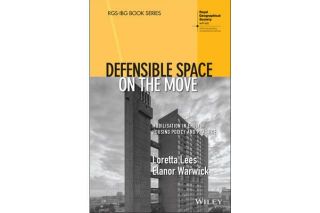 Previous
Defensible Space on the Move: Mobilisation in English Housing Policy and Practice

Next
The Unsettling Outdoors: Environmental Estrangement in Everyday Life