Defensible Space on the Move: Mobilisation in English Housing Policy and Practice

Rob Imrie reviews this book that charts the history and development of one of the most influential concepts in urban design: defensible space. 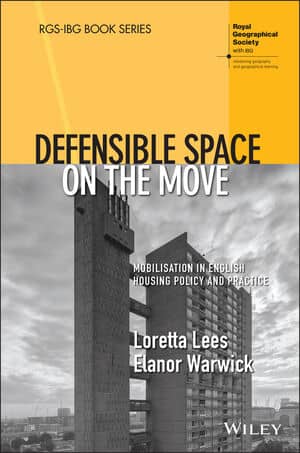 A perennial element of debate about urban living relates to people’s health and well-being, and the role of environmental design in contributing to the creation of safe and secure spaces. From the earliest writings about the city, authors have speculated about the importance of physical design in shaping social interactions, including the security of urban inhabitants. A formative observation was made by Marcus Vitruvius Pollio (1960: 22)  in 27 BC in the classic book, On Architecture, in which his advice was that the securitised settlement 'should be laid out not as an exact square nor with salient angles, but in circular form, to give a view of the enemy from many points'. For Vitruvius (1960), physical form had the capacity to facilitate and shape social control to ward off threats to life, or what the urban designer Kevin Lynch (1960: 136) referred to as the 'outer physical shape' that, dependent on the siting of its various elements, could 'invite or reject attention [and] facilitate or resist organisation or differentiation'.

Such observations recognise that the design of buildings and related infrastructure is, as Appadurai (2013: 254) notes, 'a primary source of social order' and the basis for the sustenance of life. This sentiment pervades the concept of defensible space that is the subject of Lees and Warwick’s intriguing and excellent book. Defensible space is a key concept in urban studies that has shaped a whole raft of government policies and practices, and, as the authors suggest, 'continues to be a powerful and influential way of salvaging "problem estates’" and making good failed housing design' (p. 237). The premise of defensible space is that crime, criminality, and anti-social behaviour can be reduced by designing the form of the built environment in ways whereby a territorial influence or control can be exercised by occupiers of buildings and spaces. Here, physical design, including natural surveillance, such as windows overlooking public space, may be significant in enabling what Oscar Newman (1976: 4) described as inhabitants becoming the 'key agents in ensuring their security'.

That the idea of defensible space became an important part of urban policy in the late 20th century is no surprise given its seemingly simple prognosis, that, by design, crime and anti-social behaviour can be reduced and urban spaces made relatively safe and secure. In this ground breaking book, Lees and Warwick consider the genesis of defensible space, including its mobilisation by urban policy practitioners in seeking to improve housing conditions and their neighbourhoods in England. The book is very well written and organised and characterised by a rich and intriguing series of data. These includes case studies of urban developments that have applied defensible space, and insightful and fascinating interviews with some of the key protagonists involved in propagating the concept. Foremost was Alice Coleman (1985: 83) whose book, Utopia on Trial, popularised defensible space in England based on her understanding that while bad 'design does not determine anything… it increases the odds against which people have to struggle to preserve civilised standards'.

Coleman’s observation was part of a lineage that Lees and Warwick trace back to the roots of early urban sociology, in which various observers of the city, ranging from George Simmel to Louis Wirth, Lewis Mumford, and Kevin Lynch wrote about the various degradations of urban life and the perils and problems of living in cities. For Lees and Warwick, different notions of defensible space are detectable in the writings of these authors. These range from Lynch’s (1960: 4) promotion of legible design, that 'not only offers security but also heightens the potential depth and intensity of human experience', to Jane Jacobs (1961: 45) exhortation to redesign space so that 'eyes on the street' can operate as systems of ‘natural’ surveillance. Such views show that the idea of defensible space is neither singular nor deriving from a particular point of origin. Rather, as Lees and Warwick suggest, the concept has a long and complex history, characterised by a multiplicity of strands relating to its development, elaboration and movement into, and shaping of, policy and practice.

This is the crux of the book where the authors convincingly explore the development and mobilisation of defensible space, and its multifarious manifestations in policy and practice. In doing so, the book is not only an important contribution to the dissection, and analysis, of an important concept in urban studies, but also how it began to travel from one policy context to another. Here, the authors contribute to the burgeoning literature on policy mobilities, with a focus on policy circulation, or how defensible space was drawn into specific institutional arenas, propagated by significant agents, and subject to key actions or modes of decision making. The filtration of defensible space into English urban and housing policy is discussed through a range of examples, including public housing projects in the 1970’s, to the creation of safe, sanitary, post-pandemic spaces. These illustrations provide the backdrop for a rich series of analysis, from the discussion of the mobilisation of defensible space through key change agents, to the reactions against it, and some of the hotly contested debates about its efficacy.

Some reactions and debates were predictable and, as the authors show, while many academics sought to dismantle and discredit the concept, claiming it was everything from environmental determinism to a crude caricature of crime and social processes, policy practitioners were much more sanguine and accepting of it. Lees and Warwick show examples of how defensible space seemed to make sense to practitioners working to eradicate crime and social malaise in housing estates. An example is the Mozart estate in the London Borough of Westminster that, after its construction in 1974, quickly became an undesirable place to live. Lees and Warwick document the application of defensible space principles as part of a 30-year regeneration programme of the estate, including the demolition of walkways and the redesign and retrofitting of its physical fabric. Their account is fascinating by highlighting that at different junctures of the process the idea, and practice, of defensible space was fluid and mutating with practitioners readjusting its different elements.

The book conveys an understanding that defensible space was, for many practitioners, intuitive, and it appealed precisely because it offered a ‘common sense idea’ to tackle some of the seemingly intractable problems of England’s housing estates. However, as the authors discuss, practitioners’ acceptance of the idea was related, in part, to their practical experiences in which the urban policy objective, of seeking to secure places by design, was often already part of what they did and not something that needed to be imported, or transferred, from somewhere, or somebody else. It was more a case that practitioners recognised and understood the messages embedded in Alice Coleman’s Utopia on Trial and other academic outputs, or, as Robinson (2018, quoted by Lees and Warwick, p. 231) notes, 'the assumption that policy ideas even arrive is rather misplaced – at the very least we lose sight of the policies that were already there'.

Defensible space is not a relic or system of ideas that have withered since the late 20th century, although, as Lees and Warwick show, despite the mobilisation of the concept, and its application to high rise housing estates, there seems to be 'a failure to take on board the complex lessons that the critical histories of defensible space teach' (p. 239). This is evidenced by many contemporary housing developments, the designers of which seem indifferent to personal safety, and ignorant of the possibilities for designing out public spaces that are antithetical to sociability and the creation of co-presence and natural surveillance. Rather, much contemporary urbanism is designed around the evisceration of the public from the public realm and the creation of spaces that rely on de-peopled, mechanical, systems of surveillance. Volume build housing estates continue to be built as stand-alone, impermeable, spaces, dominated by road systems and motor vehicles, and poorly integrated into their contexts or neighbouring environments.

All of this and more is evidence that despite the observations of Alice Coleman, Oscar Newman, and others, about the need to create co-presence in space, and to redesign places around natural surveillance, 'planning, design or crime reduction policy has been unable to ensure that what is built takes notice of the lengthy and extensive scrutiny given to the idea and its effects' (p. 245). This is a salutary conclusion by the authors, and reflects, in part, the diverse interpretations of defensible space, its partial and indeterminate form, the fact that, over time, views have changed about what it is, or what it ought to be, and, more crucially, that, as a concept, it is, as the authors suggest, 'loosely defined' and 'confused and ambiguous' (p. 232). The result, as the book implies, is that there are 'multiple versions of the concept' in which practitioners take from it what they think will work, while 'discarding those elements that are deemed unnecessary, inappropriate or unlikely to succeed' (p. 233). In this respect, there is little that is uniform or consistent about how the idea of defensible space is understood and applied by practitioners.

Defensible Space on the Move is a fine historiography based on meticulous research and a forensic investigative approach to its subject matter. The book will appeal to a broad readership, including academic researchers, policy makers, students, and lay people. The book is seminal in its careful documentation, and discussion, of one of the more important ideas about what the good city is or ought to be. Through a careful assembling of material, the authors have elevated, and enhanced, the understanding about policy mobilities, in which the fluid, often contradictory, and messy nature of practice is highlighted. The book also makes the important case for the significance of practitioner knowledge and world views, and it exhorts academics to take much more seriously how practical know-how is able to 'speak back to theories and concepts' (p. 229). This is a welcome, and recurrent, theme of the book, that is a model of its type of how to engage, critically, theoretically and methodologically, with one of the most influential concepts relating to urban form and process.

Appadurai A. (2013). The Future as Cultural Fact: Essays on the Global Condition. New York: Verso. 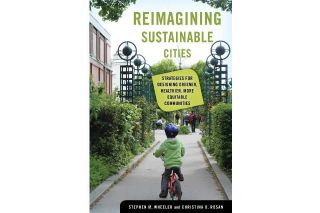 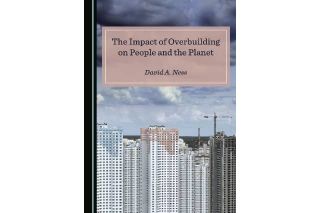 Next
The Impact of Overbuilding on People and the Planet