[Living structure] is a fundamental view of the world. It says that when you build a thing you cannot merely build that thing in isolation, but must also repair the world around it, and within it, so that the larger world at that one place becomes more coherent, and more whole; and the thing which you make takes its place in the web of nature, as you make it.
(Alexander et al. 1977)

A Pattern Language (Alexander et al. 1977) triggered, among other things, object-oriented programming, and the Wikipedia framework. Christopher Alexander’s fundamental view of the world states that space, both inside and outside our body, is neither lifeless nor neutral, but a living structure capable of being more living or less living. It is also referred to as the third view of space (Jiang & Huang 2021, Jiang 2022). This is in contrast to Newtonian absolute space and Leibnizian relational space, both of which are framed under the Cartesian mechanistic worldview. A living structure consists of far more small substructures than large ones across all scales (or hierarchical levels), but substructures on each of the scales (or hierarchical levels) are more or less similar in size (Figure 1). London has six hierarchical levels, but Manhattan has only three.  In The Nature of Order, Alexander (2002-2005) used the term center to refer to what I refer to here as substructure.

Alexander’s (2002-2005) understanding of space was substantially inspired by the organismic worldview, first conceived by the British philosopher Alfred Whitehead (1929), that extends the Cartesian mechanistic worldview to include human beings as part of the world picture. Thus, humans are inherently connected to things in our surroundings, just as things themselves are internally connected rather than externally connected. The same worldview had been advocated by many writers including the quantum physicist David Bohm (1980).

This thinking also applies to the way that Google ranks the relevance or importance of a webpage. A webpage is not isolated, but part of the huge web graph consisting of billions and billions of interconnected webpages. For any given search, there are always far more less-relevant webpages than more-relevant ones, and the most relevant ones appear in the first page of the searched results. In other words, the relevance or importance of a webpage depends on those in-linked webpages. Through the web graph and built on the recursive definition that important pages are those to which many important pages point, the PageRank algorithm (Page and Brin 1998) can efficiently and effectively calculate the ranking score.

In the end, these seemingly subjective terms – relevance, goodness, coherence, and wholeness – are in fact objective or act as a structure in nature. Alexander had this idea of the PageRank algorithm when he was working on the pattern language work (Alexander et al. 1977). Interestingly, he had the same kind of complex network (or web graph) thinking, while he was working on his earlier works (Alexander 1964, 1965). In this regard, he is a genuine pioneer of complex networks.

The relevance, ‘goodness’, coherence, or wholeness of a thing is a matter of fact rather than opinion or personal preference. Such an understanding is deemed to be universal and largely triggered by the underlying structural character called living structure. This shared notion of goodness or the quality without a name (Alexander 1979) should become the hard and universal standard of sustainable urban planning. Fortunately, a mathematical model of living structure or wholeness (Jiang 2015a, 2019) has been developed to address not only why a structure is beautiful, but also how beautiful the structure is. The mathematical model relies on two factors to determine the degree of livingness or goodness: (1) the number of substructures, and (2) their inherent hierarchy. The more substructures it has,  the more living it is. Likewise, the higher hierarchy of the substructures it has, the more living it is. Figure 1 illustrates that the city of London is more living or more beautiful (as a plan) than Manhattan.

Alexander’s view of space implies that sustainable urban planning is not LEGO-like assembly of prefabricated elements, but an embryo-like growth guided by two design principles – differentiation and adaptation – towards a coherent or more coherent whole. A city or community is persistently differentiated like cell division in a step-by-step fashion to generate far more small substructures than large ones, and the differentiated substructures must adapt to each other not only locally but also globally. That is required to meet the two notions or two laws of living structure: far more small substructures than large ones across all scales (the scaling law, Jiang 2015b) and more or less similar substructures on each of the scales (Tobler’s law, which is commonly called the first law of geography) (Tobler 1970). These two laws underlie the 15 properties (Figure 2) that were distilled or discovered by Alexander (2002-2005) from traditional cities, buildings, and artifacts. These 15 properties exist – pervasively – not only in what humans create (e.g. buildings, cities, carpets, etc), but also in nature or naturally occurring things of various kinds.

To create a city or a building is essentially to transform that place into a more coherent entity. The transformed city or building should directly contribute to that place to become living or more living. The transformation also called wholeness-enhanced unfolding proceeds in a step-by-step fashion. Once that place is well shaped as a living structure, it tends to shape the behavior of human beings. To paraphrase Winston Churchill (1874-1965), we first shape our space to be a living structure, and afterwards our activities are shaped by it. It should be noted that this process of “shape and shaped-by” goes in a never-ending recursive manner or in a timeless way (Alexander 1979). Unfortunately, the science of the past 300 years, framed under the Cartesian mechanistic worldview, is essentially unable to create living cities, as argued by Alexander (2002-2005). It is the time for us to embrace the Whiteheadian organismic worldview in order to transform modern cities to be living or more living towards a sustainable society.

Alexander, C. (2002-2005). The Nature of Order: An Essay on the Art of Building and the Nature of the Universe. Berkeley: Center for Environmental Structure.

Jiang, B. (2015a). Wholeness as a hierarchical graph to capture the nature of space. International Journal of Geographical Information Science, 29(9), 1632–1648.

Jiang, B. (2015b). Geospatial analysis requires a different way of thinking: the problem of spatial heterogeneity. GeoJournal, 80(1), 1–13. 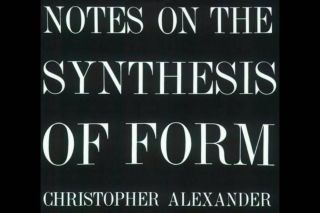 Previous
Christopher Alexander and 'Notes on the Synthesis of Form' 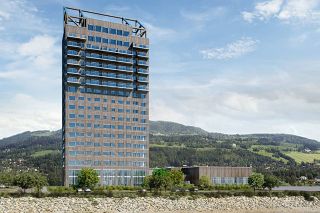