RESEARCH PATHWAY: personal reflections on a career in research

Architect Yasmeen Lari (Heritage Foundation of Pakistan) reflects on her journey that led her from corporate architecture to working for climate disaster relief in Pakistan. She highlights some of the challenges in designing low-cost, low-carbon buildings for the most vulnerable and provides advice for architects and early career researchers on creating impact for communities at-risk. Interview and text by Rihab Khalid (University of Cambridge).

Yasmeen Lari started practising architecture in Pakistan in 1964. Growing up in an anglicised environment with lingering colonial influences and getting educated at Oxford Brooks University UK meant that her initial approach to architecture was inspired by Western influences. Her architectural career took off with some of the most iconic buildings in Pakistan, including the Taj Mahal (now Regent Plaza) Hotel (1981) and the headquarters of the Pakistan State Oil Company (1991) - feats of towering concrete, steel and glass, encapsulating the prevalent post-modernist ideologies of the time.

After completing her studies in the UK, Lari’s return to Pakistan began a reconnection with her country’s architectural history. Through visits of historical towns, including the Walled Cities of Lahore and Multan, Lari began comparing mainstream colonially-influenced patterns of building and planning with vernacular traditions, recognising the discrepancy of the former with the local climate and culture:

“The new towns being designed in this desert had wide streets and widely-spaced houses, as dictated by the colonial bylaws. I found that there was no life in those settlements. In contrast, the old towns were teaming with people. There's so much life there, and things happening at different levels- entirely different from the newly planned areas. I learnt a lot just by walking around and looking at things.”

During this phase (late 1970s – 2000), whilst much of her work targeted the corporate sector or focused on designing for the elite, Lari also had some opportunity to work on social housing. Prominent among these was the Angoori Bagh housing project. Built mostly in brick as the most readily available material in Lahore, the housing design incorporated several environmental design strategies adapted from local traditional practices that later gained appraisal for their sustainable underpinnings.

Lari was also deeply influenced by the work of architect Hassan Fathy, and his use of adobe and traditional mud construction (e.g. Fathy et al. 1986).  Traditional influences deepened their impression on Lari as she started work on heritage conservation and documentation (Lari 1989, 2003), and began experimenting with different sustainable materials:

“I had no idea that I could stabilise mud with lime. I had started experimenting, but not too much. If I had continued work for the corporate sector, it would have ended any innovation, as I wouldn’t have had the chance to push my boundaries further.”

According to Lari, her departure from the usual way of practising (commercial) architecture in 2000 proved to be the most influential decision of her career. Elitist projects whilst rewarding in their prestigious scope, often came with strings attached, as Lari later realised. She felt the authenticity of the profession had taken a back seat to political ideologies and elitist whims; corporate demands and financial decision-making often taking precedence over design integrity. The decision to leave her practice, while daunting, opened the door to many new experiences for Lari, including the Karavan Pakistan programme in 2002:

“Sitting on the streets celebrating the colonial buildings of Karachi became a big movement for the city, which was suffering from a lot of violence and terrorism. That was an amazing experience. It was the first time I sat on the streets with people, I had never done it before in my life”

Working with the less privileged helped Lari become aware of the unfulfilled needs and issues faced by the majority low-income communities in Pakistan. During this time, Lari also became the national advisor to UNESCO for the World Heritage Site of Lahore fort. Through this, she gained invaluable expertise in the use of vernacular techniques and materials such as lime and began delving into environmentally responsive design. However, it was the 2005 Kashmir earthquake and the extent of devastation faced by the people that significantly changed Lari’s perspective- bringing people to the centre-stage of her design philosophy.

Changing the context for a changing climate

From 2005, Lari began her involvement with humanitarian work. For Lari, this was an extremely sobering experience. The responsibility to act and provide support became a core drive for her work. Admittedly, she had no previous experience designing for seismic zones but instinctively decided to recycle materials from the extensive debris left behind. Working with lime in heritage conservation had familiarised her to its benefits, which she now used in rebuilding housing with increased strength and durability (Lari 2015). The structures proved successful, as Lari had anticipated. What was unexpected was the exhilarating support, particularly from the youth:

“So many young people joined me, which was an amazing experience. That's why humanitarian work can be so rewarding; you basically start on your own, going into uncharted waters having no idea what you will be confronted with, but suddenly so much help comes to you from all quarters”

Dealing with the severity of Pakistan’s climate-based disasters and their impact on the people thus became Lari’s primary concern. This led to her Barefoot Social Architecture work, co-producing emergency shelters and other community structures together with impoverished climate refugees using indigenous knowledge and vernacular techniques (Figures 1 and 2). From the beginning, Lari recognised the importance of working together with the people in a participatory design approach. Previous efforts in the area by local institutions and international agencies had focused on rebuilding new structures. However, Lari understood that building resilience meant that people had to (re)build for themselves. In working with the local communities, Lari found that being a woman worked in her favour:

“I was very fortunate to be a woman because I was able to interact with women in the area, which most men could not. I had the privilege of being admitted anywhere, without resistance. Women have been behind me in all these efforts, and I put a great store by them. Even today working in the flooded areas, everything is led by women… they are now earning as well, which gives them a sense of pride.”

Lari’s work has explicitly focused on capacity building for women, providing them the necessary skills and training for socio-economic empowerment. An example of this is the Pakistan Chulah (Figure 3), a cookstove built using lime mud bricks on an elevated earthen platform. Designed to improve energy efficiency and withstand flooding damage, the stove has helped thousands of rural women in generating an income and becoming self-sufficient (World Habitat, 2018). Lari believes in a paradigm shift from charity to empowerment; partnering with local communities to build capacity and livelihoods, using vernacular traditions and sustainable practices.

Along the way, Lari has faced her set of challenges. The greatest difficulty for Lari in working with communities has been countering the colonial legacies inherent in charity-based models implemented by international donor agencies. Whilst providing necessary immediate relief, such models can also develop a sense of dependency and lack of agency among those displaced:

“I've seen so much of this, and I don't agree with it. I think it's very demeaning and kills their [the people’s] sense of integrity and dignity. We must do everything possible to lift these people out of this state of dependency and apathy. It can only be done if we work with them as partners and not as victims that need handouts.”

Working independently through her Heritage Foundation, Lari’s humanitarian work has benefitted thousands with substantial support from local communities and professional experts alike. However, she recognises the challenge that grassroots initiatives like hers face in upscaling without organised support. Humanitarian work cannot be done as a lone endeavour, and whilst financial support has its place, not all problems require monetary solutions. Instead of relying solely on top-down or external support, Lari believes in the power of the people:

“I think we must start looking at everything in a very different manner… systems developed in the North may or may not work for the South. Like most countries, we have poor governance. We have huge pilferage of all kinds. That's why I think it's better to use low-cost materials that are sustainable and locally sourced because they cannot be pilfered... We must find ways to get to the people. Whatever we do must fulfil their needs, and they must have control over.”

Lari is working towards replicating her existing participatory design model in other village clusters, relying on an incremental bottom-up approach to building resilience. Her experiences have taught her that while progression may be slow, it can certainly be impactful.

The three most important lessons Lari has learned through her journey include:

It is imperative for architectural design to cater to the needs of the majority of the world’s poor:

“Architects in my part of the world carry added responsibility because we know that more than 50% of our population is below the poverty line. So, for us to work for the elite 1% of the top is meaningless because the majority is not getting the benefit of our design capability, which is so important when there are restricted resources.”

Sadly, Lari fears that altruistic intentions for social architecture are still missing from much of the field. Not many opportunities exist for young architects to take on humanitarian work, or to even experiment in low-cost, low-tech solutions targeted towards at-risk, vulnerable, and marginalised populations. Much reformation is still needed among building, architectural and engineering practices worldwide to enable support, training and finances for innovation and solutions that target those most in need of good design.

Lari advocates a few key solutions: the creation of research incubators in universities, incorporating co-production and participatory design approaches with local communities to address their specific needs. And there is also a need for establishing pro bono wings in design and construction firms:

“I believe that non-architecture is a different way of practising architecture. It allows freedom to the user. I call it co-building and co-creation. I'm there to create a canvas on which other people will have their play, and that’s the most enriching part of the whole experience. We are here as facilitators, not as dictators. It's a different way of thinking about architecture.”

Lari acknowledges that there is more work needed to find innovative and efficient techniques and materials in design that respond to their local context and benefit the local people. For this, focus needs to shift towards better understanding of the impacts of building and construction, and a constant and vigilant awareness of the cost of our actions to the planet.

Lari, Y. (2015). Towards a Sustainable Future Build Back Safer with Vernacular Methodologies (The Green Manual; p. 69). Heritage Foundation of Pakistan. 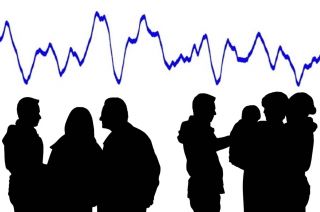 Next
Making an Impact on Household Energy Consumption