Over 40 years SBSE has raised environmental awareness and capabilities.

Bruce Haglund (University of Idaho) reflects on the creation of the Society of Building Science Educators (SBSE) and its unique ethos of sharing amongst academics and supporting students. Understanding the importance of excellence in teaching building science, this group has been critical for improving its teaching and spreading environmental knowledge worldwide.

Four decades ago, friends and colleagues Ed Arens (University of Calfornia, Berkeley) and G.Z. ‘Charlie’ Brown (University of Oregon) imagined a support group for teachers of building science. Neither specialists in architectural design nor engineers they felt isolated, lacking peer support within their respective faculties. Sensing that others likely shared their woes, they proposed a new group, the West Coast ECS1 Club, to help building science instructors share ideas, materials, and methods to improve the teaching of such courses in the Western US. The first ‘club’ meeting was held in 1983 at an international daylighting conference in Long Beach, CA. Far more educators attended (including me at the onset of my teaching career) than Ed and Charlie had anticipated. Charlie and Ed had identified a real need. Educators from all over the country were present, dispelling the notion that the club was merely a West Coast need. Consequently, the group selected a more all-encompassing designation, the Society of Building Science Educators (SBSE), that proved germane beyond the West Coast, indeed beyond the US  borders.

The emergence of SBSE was before the days the internet became a social meeting space and a repository of information and images. The typical professional and social spaces for educators were national and international conferences where they could present their research and scholarship. Luckily there were some venues available for building scientists—daylighting, passive solar, and technology conferences. SBSE sponsored meetings and events at most such conferences. Especially attractive were materials sharing sessions where hard copies of syllabi, tests, and assignments (personally hauled to the event in big boxes) were available to copy and donated ECS-themed slide sets were paired with a slide copier that were also lugged to the conferences. All this face-to-face activity created a strong spirit of camaraderie with an ethos of networking and sharing, forging the framework for an enduring society whose members continue to share sans ego, sans restriction. All efforts are aimed at a better, more sustainable future, evidence that SBSE is not your ordinary academic organisation.

How has SBSE retained this spirit for four decades? It’s an all-volunteer, nonprofit organisation that requires sharing and giving for sustenance. Dues are modest ($50/year, students $15/year, and students and faculty from emerging economies are given gratis memberships), creating an open society that welcomes all.

The heart of the organisation is the annual curriculum development retreat which defies the expectations of academia. The retreat is not a typical peer-reviewed conference so attendees get no CV credit for their attendance nor their presentations. A small group of 20 to 50 SBSEers2 gather at a rustic (or occasionally urban) setting for three intense days of learning from each other. As a participant in over 25 consecutive retreats early in my career, I reaped the rewards of the sharing and fellowship that enriched my teaching and scholarship. These rewards are far more important than vita credit. Much of what I’ve thus far learned has been embedded in my lectures and syllabi, greatly benefitting my students. Most significant: networking with Chris Luebkeman (Arup) led to the opportunity to serve as a scholar-in-residence at Arup’s London headquarters. I gained the contacts and familiarity that resulted in a month-long, residential summer studies abroad course in the UK based on green buildings and urbanism for my University of Idaho students. Over 100 architecture students, over 8 summers beginning in 2006, have experienced life and architecture in the UK.

At a personal level, it’s been my mission to give back to this great community. I’ve served as Treasurer, President-Elect, President, and currently as Communications Committee Chair—all Board of Directors positions. More significantly, I’ve co-organised several retreats in truly inspiring places where meaningful SBSE interactions for sharing and learning happen. And I’ve been passionate about producing a high-quality quarterly newsletter for a technically astute and visually literate society since 1992. It began as a hard-copy, print edition mailed to the membership, but is now solely delivered via the web. My co-conspirator on the SBSE News has been my wife Tisha Egashira who has been the guardian of usage, consistency, tone, and voice that are the hallmarks of a professional effort. I’ve learned a lot from her!

SBSE is a nimble organisation, adapting to the evolving means of communication from pre-internet days to the present. Both the person-to-person encounters at conferences and retreats have persisted and been augmented by additional modes of interaction. From early days, SBSEers took advantage of the internet by building a web page (www.sbse.org), a list server, and most recently a LinkedIn presence. SBSE’s active international membership is almost 500-strong and over 1,000 are subscribed to the list server. The quarterly SBSE News is distributed via both the list server and the web site, which also acts as an archive for past issues, starting in 1992 when I became the editor—over 120 issues ago. One can learn almost everything about SBSE by visiting the web site. Those who share ideas and insights through these channels range from students, professors, researchers, practitioners, and luminaries—many authors of widely used textbooks on building science (check out the Book Nook column in the SBSE News) are SBSEers and contributors to the discourse.

SBSE is not for profit and has no employees. The funds from membership dues and sales of Pilkington Sun Angle Calculators support a robust scholarship program that makes awards for student attendance at retreats and conferences. SBSE also acts as a conduit for the Jeffery Cook Memorial Trust funding of international faculty at the retreat as well as student participation in annual PLEA conferences. This commitment is aimed at training and inspiring the emerging generations to become building science educators (and SBSE members). The retreats and conferences are where networks are begun and nourished. These young scholars are the future of SBSE and society.

The key reason to participate in SBSE is that ‘SBSE provides access to an international network of educators, professionals, and those in related disciplines who support excellence in the teaching of environmental science and building technologies.’ Moreover, SBSE keeps abreast of new environmental building techniques that require parallel innovations in teaching. SBSE promotes this innovation through shared information and peer review. Both the technology and pedagogy have research implications. Thus, the exchange of ideas, materials, and techniques, coupled with new educational processes, are critical bottom-up infusions that SBSE makes to architectural education. These exchanges have accelerated the diffusion and adoption of new pedagogical approaches and practices. SBSE’s current activities and resources continue to expand, enabling SBSE to provide benefits in education, research, and service to its members. SBSE has evolved from focusing on saving energy to ‘saving the planet’ through net zero design.

For me this access has been invaluable, especially since it comes with sharing, collaboration, and support. I’ve found co-authors for conference papers, co-presenters of workshops (e.g., Tool Days), guest lecturers and critics for my courses, seminars, and architectural design studios. Colleagues have included me in their grant projects, notably Cris Benton and Alison Kwok in 'Vital Signs' and Alison again in 'Agents of Change' running workshops to train current and future teachers in evaluating building performance. These workshops led to the development of Tool Days (most recently in Edinburgh in 2017) with Alison Kwok and Walter Grondzik. I cannot imagine a better group of colleagues!

SBSE has created and sustained an ethos of sharing amongst peers. Several generations of academics have recognised that it’s good to share. In fact, it’s essential. The direct benefits gained by the membership, the public, diverse communities, and the planet are profound while the downstream effects are incalculable. I encourage you, gentle reader, to share in order to prosper. Our planet is at stake.

Over 40 years, an ever-increasing number of students have benefitted from greater exposure to evolving information and enthusiasm from faculty who no longer bear the shackles of isolation. This sustained collaborative effort has meant that building science and environmental design are no longer marginalised within the curriculum.

Being green is not easy, but it is rewarding. SBSE has grown from a handful of eco-educators to a worldwide society of dedicated professionals aimed at mitigating climate change through design and more comprehensive education.

1. Environmental Control Systems (ECS) is a lecture course common to most architecture curricula in the US and Canada. The course covers environmental issues from thermal to luminous, to acoustic, and to waste and water use. Also, at the time there were two philosophies in delivering ECS: 1) East Coast where a specialist, often an engineer, taught ECS as a technical course and 2) West Coast where faculty trained in architecture taught ECS from an architectural point-of-view while also teaching architectural design studios and perhaps advanced seminars.

2. Who put the ‘seers’ in SBSEers? Appropriately, members are futurists who are effectively dealing with a changing climate. 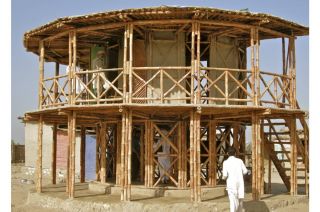