Why accomodating gender & diversity is vital for the widespread adoption of smart energy technologies.

Technologies such as solar panels, automated energy-efficient appliances and electric vehicles have seen an exponential surge in their use within the home. Not only are these technologies seen as co-existing with the social, functional, and aesthetic needs within the home, but they have also been promoted by policymakers, energy demand managers, and sustainability researchers as the eco-modern pathway to solving current ecological crises. These technologies are linked to other energy demand management strategies (load-shifting and flexibility) that promote decarbonization and low-carbon visions.

Closer scrutiny from feminist, masculinities and nature-society scholars reveals a more fundamental side of the re-organisation, alterations, and disruptions to everyday life that renewable energy technologies bring into, and reinforce within, the home. Taking a relational lens, these scholars show the complex layers of gendered and intersectional power asymmetries that current visions of “eco-modern smartness” have within the home (Groves et al., 2021). As technologies are shaped by power relations, it is important to understand:

The recent Buildings & Cities special issue ‘Energy, Emerging Technologies and Gender in Homes’ examined the gender and power realities that energy technologies and their accompanying market and policy logics bring into, and reinforce within, the home. The special issue captures the gendered aspects of energy technologies and smartness in the home, while also highlighting the magnitude of changes required to attain an equitable design and use of these technologies within the home. The present commentary focuses on one article: Mechlenborg & Gram-Hanssen (2022). Its focus is on solar photovoltaic (PV) technologies and how their adoption by the Danish homeowners not only interferes with existing gendered dynamics of domestic energy practices (diverse ways that men and women manage, use, and understand energy reductions in households) but creates new layers of gendered practices within the home.

Mechlenborg & Gram-Hanssen situate the adoption of solar PV within the home at the intersection of masculine domesticities, identities, and eco-modern masculinities. For them, the eco-modern Western home has seen a shift in its accommodation of different alternatives of masculinities. These alternatives play out as the modern gay dads or the DIY man cave or garage in the home (Strengers, 2014) which are differentiated spaces that enable men to perform domestic maintenance work without being drawn into the traditional female domestic work or spaces. Paying homage to Kimmel, (1987) they refer to these separate male spaces in the home as islands where masculinity remains virile and untainted and ’where patriarchy coexists with domestic masculinity‘.

Based on a qualitative study and in-depth interviews with 12 Danish households, Mechlenborg & Gram-Hanssen apply a gendered practice lens given that the societal context of Denmark is one shaped by a gendered division of household work and an association of technology as belonging to a masculine sphere. They identify three areas in which solar PV has become an extension of domestic masculinities:

Mechlenborg & Gram-Hanssen’s findings represent a crucial step in understanding the gender dynamics PV panels that actualise in the home. It also provides two critical insights that will be useful for research and policymaking around smart energy technologies within the home.

First, an exercise in reflexivity is needed when research questions are framed around the gendered and intersectional nature of energy technologies, and the context of studies. Although several studies exist on the masculinities of digital housekeeping, there is less research highlighting the performance of ’the resource man ideal‘ by participants identifying as female - except for Mechlenborg & Gram-Hanssen (2022) and de Wilde (2021). Women may possess these technical competencies but gender divisions within the households normatively dispels this knowledge as monitoring is perceived as part of the man’s identity. Gender division can also counteract the domestic goal of energy savings if men monitor but women control traditionally feminine energy-intensive tasks and do not change behaviour.

The authors' discussion on men’s use of PV to express joy and technical expertise and the reluctance of women who had the same knowledge to express this expertise until further probed brings a rather interesting question to light. Is the lack of tech-savvy performance by females absent, as some literature suggests, or do researchers’ reflexivity and methodological approaches bias the interviews and observation such that female respondents’ performance of masculinities is not visible/revealed? Further, by assuming that binary gender is the main axis of negotiation, what may scholars and technology designers miss of queer performance, and of other intersecting subjectivities?

Denmark and other Western countries are culturally particular. What would eco-modern masculinities mean in other parts of the world? How would other household constellations than the nuclear family and married couple shape technological homemaking performances? Responding to these questions would expand scholarly heuristics around gender-technology and homemaking and may reveal a slightly different story that moves away from gender performance to the realm of biopower, negotiations, and technological subjects that energy technologies are scripting, constituting, and enacting in the home. Such reflection is also needed when trying to separate the issue of empowerment of women as technical agents from the issue of the devaluation of certain low-tech performances of femininities. This separation is particularly difficult when attempting to design gender-aware home technologies, as being done in the IEA Users Technology Cooperation Programme: Gender and Energy Task.

The second insight from Mechlenborg & Gram-Hanssen (2022) is that the present ‘eco salvationist’ and smartness visions by governments, utilities and smart technology providers to promote the role of green technologies are problematic. These narratives and activities both reinforce eco-modern masculinities (Hultman, 2013) and also sustain patterns of gender dualism and inequality. Policymakers and technology developers should expect intersecting relations of gender, age, class, religion and more to shape how energy technologies are used within the home.

There is an urgent need for governments and the technology sector to understand the implication of diversity and then tailor their visions, actions, products and services accordingly. As the broader value base in society changes, traditional gender roles become more fluid, so the accommodation of different individuals with a range of homemaking performances is necessary to ensure the widespread adoption of smart energy technologies. 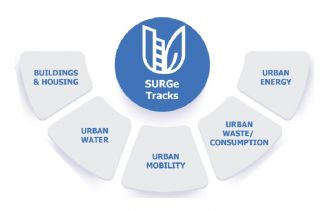 Next article
The Launch of SURGe at COP27: Breakthrough or Déjà Vu?